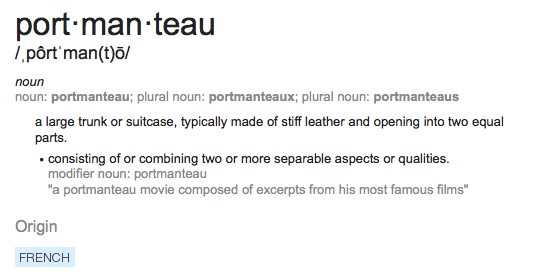 The first use of the word portmanteau in connection with vocabulary is in Lewis Carroll's Through the Looking Glass (1871). Humpty Dumpty is explaining the meaning of the nonsense poem, Jabberwocky, and how it combines words to create new ones:

This is before Humpty has that unfortunate accident on the wall. After that he really cracked-up, alas.

In French  porter means "carry" and manteau "mantle, or cloak". The combination creates a new word meaning something to carry clothes.
In English this word became associated with a specific type of travelling bag contains two sections.  Humpty uses this to explain how words like chortle (chuckle + snort) are created:
You see it's like a portmanteau—there are two meanings packed up into one word.
As with other memorable portmanteau words like splatter (splash+spatter) chortle onomatopoeia is important. Spatter (cover in drops) is rarely used in modern English.

What makes an effective portmanteau word?

As most neologisms draw on existing words, there are large numbers of new portmanteau words appearing all the time. Some become universal (brexit) but many quickly become obscure (grexit).
Here is an extract from my contribution to the Macmillan tribute: Your Favourite Portmanteau Words:

There are plenty of awful portmanteau words. Step forward jazzercise (Jazz exercise) for example, or, even worse, dramedy (dramatic comedy) which surely must merit a prison sentence.