What is the gold standard? And gold bugs? 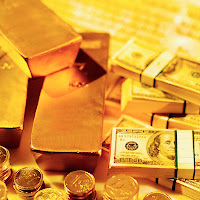 The gold standard is when the value of a currency is directly linked to the amount of physical gold held by a country. Britain had the gold standard until 1931 and the USA only abandoned it in 1971. They did this in the belief that the gold/currency link was too inflexible.

Some have argued that the gold/currency link was a key element in the Great Depression, forcing economic austerity in contracting economies.

So the gold standard is a recipe for trouble?

Life without the gold standard is also not without major problems. The US dollar, for example, has declined in value and many libertarians (most notably former Presidential candidate, Ron Paul) have argued that restoration is essential to restore economic prosperity.

Some also argue that the gold standard is the only guarantor against long-term financial catastrophe.  Freed from restraint, governments can choose 'quick fixes' like quantative easing in difficult economic circumstances - only to create hyper-inflation further down the road.

What is a gold bug?

Gold bugs passionately believe that gold is the only dependable asset in wildly fluctuating markets. They advocate buying physical gold - rather than 'paper gold' held in ETFs. This may seem counter-intuitive in that gold offers no income - only the potential for selling at a higher price in the future.

Is the gold boom over?

Gold bugs have had a very good decade but some are calling the end of the gold bull market.  A steady fall in the price turned into a dramatic drop on April 15 2013. Given that gold booms conventionally signal the weakness of other asset classes like equities, this could be seen as a sign of renewed confidence in economic growth.

Most commentators are urging caution, however - the situation remains volatile.