What is a Ponzi scheme? 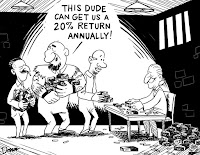 Texas Governor Rick Perry caused some controversy in recent Republican Presidential Debat by referring to the US social security system as a Ponzi scheme. Here's what he was alluding to:

A Ponzi or pyramid scheme attracts investors by offering very high and consistent profits. In reality these 'profits' do not exist - early investors are paid with the money contributed by later ones.

The original Charles Ponzi (1882 -1949) was not the first to run a pyramid scheme, but the collapse of his Boston-based financial fund in 1921 became an international scandal.

All Ponzi schemes are eventually destroyed by the thing that sustains them: confidence. While the scheme is successful there does not appear to be a problem. The infamous Madoff fund prospered for decades until the financial crisis of 2008. It was when investors tried to withdraw their capital that the fraud was revealed.

The use of the term Ponzi Scheme is no longer restricted to describing direct financial fraud. Nassim Taleb in 'Black Swan' argues:

Only Ponzi schemes should depend on confidence. Governments should never need to "restore confidence".

Perry's argument is that US social security is a Ponzi scheme because those paying now cannot realistically hope to collect on their investment  in the future.


Ponzi's Scheme: The True Story of a Financial Legend

No One Would Listen: A True Financial Thriller

Too Good to Be True: The Rise and Fall of Bernie Madoff

The Black Swan: Second Edition: The Impact of the Highly Improbable:

Photo by  Brett Jordan  on  Unsplash

Photo by  Steve Harvey  on  Unsplash 58 countries list English as an  official language  - but not the UK. T he world's  lingua franca  or second language is not, technically, the 'official' language of its birthplace .  Read full article (3 minute Medium read) English Language  Teaching Pack     -  only £1.99