Showing posts from June, 2015
Show All

What does Grexit mean? 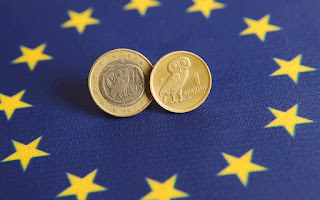 Newly fashionable term used to describe the (impending? inevitable?) departure of Greece from the Eurozone.  Greece would then be forced to introduce a new national currency, most like some variant on the former drachma.   Theoretically this should not be a world-shaking event as Greece only represents around 2% of EU economic activity. International financial institutions  also have contingency plans to contain the fall-out from a Greek default.  Some even argue that Grexit would be good for the Greek economy in the long term. So what's the big deal?   The problem is that we can't predict with certainty the impact of Grexit on international financial stability. The danger is that it could lead to the kind of chaos that followed the collapse of Lehman Brothers in 2008 . On the other hand, writing off Greek debt might tempt much larger economies (Spain, for example) to ask for the same treatment.    This saga seems to have run forever but must have some sort of resolut
Read more
More posts