Why do we say 'flea market'?

A mysterious term given that the market for fleas is limited. There are two (vaguely) plausible theories: 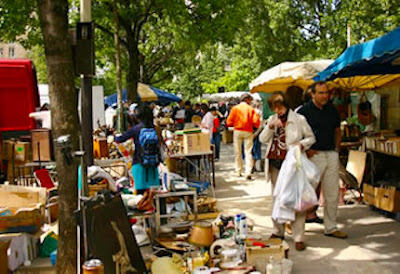 1. A translation of march aux puces -  the popular name for a large outdoor market in Paris that became popular in the 1920s. It was called the  march Aux Puces  "because there are so many second hand articles sold of all kinds that they are believed to gather fleas." [E.S. Dougherty, "In Europe," 1922]
2. From the Dutch word for swamp is given as “vlie”, which sounds like flea when spoken in English. The Dutch settlers held markets in the then swampland that was Manhattan Island.
The OED goes with the  French market explanation.
French word in English