What is an earworm?

An  earworm  is a very short piece of music which the mind involuntarily plays on certain triggers. For example, I hear the city name, Exeter, and a snatch of Bob Marley's Exodus plays in my head. Here's how the august British Psychological Society explain the phenomenon.  The brain has its own jukebox. A personal sound system for your private listening pleasure. The downside is that it has a mind of its own. It often chooses the songs and it frequently gets stuck, playing a particular tune over and over until you're sick of it. Psychologists have nicknamed these mental tunes "earworms" (from the German  Ohrwurm ).  A study from 2009   found that they can last anywhere between minutes to hours, but that they're only unpleasant in a minority of cases. Source This BBC radio documentary   takes a playful look at research into earworms
Read more

With thanks to MyEnglishTeacher.eu
Read more

What is a Republican? And a Democrat?

There are only two major political parties in the US; the Republicans & the Democrats. A representative from one or other party has won every presidential election since 1852. The above presentation briefly describes the key differences between them. How did they get the names Republican and Democrat? This gets very confusing! The  Federalist Party  of  Alexander Hamilton   was opposed by Thomas Jefferson who formed an opposition party in 1792. Jefferson's  party developed into the  Democratic-Republican Party  (1798) and was the forerunner of the modern  Democratic Party . The  modern Republican Party was founded in the 1850s and  key features included opposition to slavery and a support base in the northern states. Abraham Lincoln was a Republican, while the pro-slavery southern states were largely Democrat. Broadly speaking,  the Democratic Party is  left-of-center  and the Republican Party  right-of-center   As the 2000 Presidential Election spectacularly p
Read more 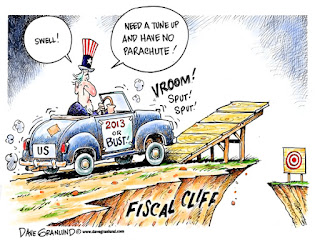 Annual income twenty pounds, annual expenditure nineteen six, result happiness. Annual income twenty pounds, annual expenditure twenty pound ought and six, result misery.   Mr Micawber in Charles Dickens David Copperfield (1850) The ' fiscal cliff ' is the phrase used by Federal Reserve Chairman Ben Bernanke to describe the situation US economy will face in January 2013 if political agreement is not reached in Washington. At that time a series of tax rises (the expiration of the 'Bush tax cuts') and spending cuts (part of a previous agreement) will take effect. As things stand the Democrats - including the freshly re-elected President - are refusing to cut expenditure on programs like Medicare. They insist on tax rises for 'the super rich' or 'millionaires and billionaires' as it expressed in electoral rhetoric. Both sides are hemmed in by the 'debt ceiling' - a legal limit to the amount that can be borrowed - and the a previous agr
Read more

Word for admirer of American culture?

There does not seem to be an agreed term as you can see from the number of Google references here: yankophile 945 americanophile 716 americophile 233 americaphile 150 usaphile 14 usphile 1 Contrast this with the situation for lovers of French, English, Chinese or Japanese culture anglophile 102,000, francophile 84,700, japanophile 20,400, sinophile 3450 Why is this? Snobbery, perhaps - a 'new' culture looked down on by traditional ones? Or pure prejudice? Casual anti-Americanism is often indulged where  where other forms of bigotry are socially unacceptable. Or is it just linguistically awkward - americaphile really isn't a pretty word. You might want to check out:  (audio) discussion about the relationship between British and American English  here . Time Magazine piece on  The Next American Century The New American Century Alistair Cooke's America
Read more

How many letters does the Hawaiian language use? 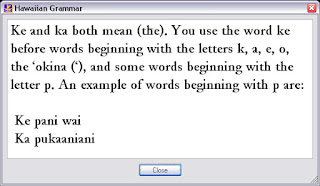 Only 12 letters when using the English alphabet. On 20 August, 1959 Hawaii became the 50th state of the USA. To mark the occasion here are some fun facts about the world's biggest producer of pineapples. listen to ‘Fun Facts about Hawaii’ on Audioboo
Read more
More posts