Why are there so many languages?

Is it bale? Or bail? And what about bailout?

The word bailout has become closely associated with the idea of financial rescue -    to bail out the banks.  But it has many subtle usages - and two spellings! 1. The literal use of bail/bale is to abandon abruptly as in making an emergency exit from an aeroplane in a parachute.  2. The literal meaning of   to bail out  is to remove water from a leaky boat.  3. It is now more common to use bail   in a figurative/metaphorical sense: The minister has bailed on the government's housing policy ( announced his opposition) . The actor bailed on the script (stopped reading his lines with any show of conviction)  4. 'Bail out' is also used metaphorically but usually with a closer connection to the literal meaning: The pilot bailed out of his plane but not Bob has bailed out on us and gone home. 5. The noun is sometimes spelled as one word: bailout. 6. There is a dispute over the spelling of bail and bale - bail is probably used more frequently but both are allowed b
Read more

OMG! Why did the Oxford English Dictionary include OMG?

Where does the word tsumami come from?

How do children learn language?

What is mission creep? 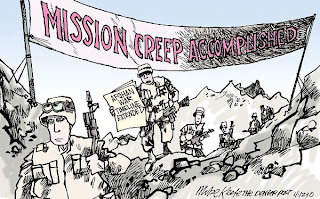 Mission creep is when an original plan or objective is progressively widened by events on the ground. Significantly the phrase has military origin Originating in Somalia in 1993, the modern term “mission creep” became part of official U.S. Army vocabulary a decade late r. Field Manual 3-07, Stability Operations and Support Operations (February 2003) acknowledges two types of mission creep. The first occurs when “the unit receives shifting guidance or a change in mission for which the unit is not properly configured or resourced.” Lewis and Clark  In other words you start with a limited objective but this expands to the point where it is no longer clear. This phrase has also been used to describe non-military matters - financial regulation, for example . The Dictionary of Military Terms
Read more
More posts