Showing posts with the label mad hatter
Show All 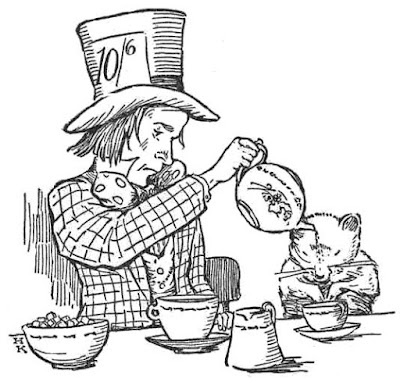 'Mad as a hatter' is usually used to describe extreme eccentricity.  The phrase appears in The Clockmaker (1817) by Thomas Haliburton. Perhaps surprisingly, it is not used directly by Lewis Carroll  in either  Alice in Wonderland ' (1865) or Through the Looking Glass (1871).  Chapter VII of the former is, however, called A Mad Tea Party. It also  attended by a hatter, who the Cheshire Cat calls 'mad. It is the  zany antics at the tea party that are being referenced in modern usage. Mercury poisoning The phrase is commonly believed to allude to the grim effect of mercury poisoning on workers (hatters) manufacturing felt hats.  Mercury poisoning  affects the nervous system, with dementia a common symptom.  Victims developed severe and uncontrollable muscular tremors and twitching limbs, called 'hatter's shakes'; other symptoms included distorted vision and confused speech. Advanced cases developed hallucinations and other psychotic symptoms. source Da
Read more
More posts