How did English evolve?

What is Fowler’s Modern English?

A Dictionary of Modern English Usage (1926), by Henry W. Fowler (1858–1933), is a style guide to British English usage, pronunciation, and writing. Ranging from plurals and literary technique to the distinctions among like words (homonyms, synonyms, etc.), to foreign-term use, it became the standard for most style guides that followed and remains in print.   source Fowler's legacy is claimed by both the descriptivist and prescriptivist  schools of linguistics. David Crystal (perhaps the leading descriptivist) has written the introduction to the new edition . A version of this post is included in  50 FAQ about English    ($1.75) A Dictionary of Modern English Usage: Classic First Edition  Begat: The King James Bible and the English Language
Read more 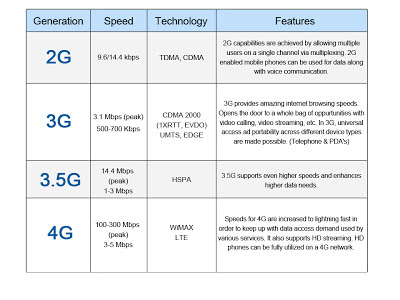 Standard answer: 4G is the fourth generation of broadband mobile phone licences. Download/upload speeds are much faster. Alternative answer: The Parable of the Mobile Phone Bandwidth In the beginning there was a thing called the telephone. You used it to call someone from somewhere - your house, if you were rich enough. Then Mr Cooper invented a portable phone. Martin Cooper inventor of first mobile phone People thought ‘what if I could carry a phone with me? Then I could talk to my friends inside my house and outside, too. Cool! How to do this? First of all you needed a new telephone network with new numbers. And so was born the first generation of mobile telephony. The first mobiles were gigantic but they soon got smaller and smaller (see Moore's Law ). You could write messages on them, too! Even cooler! 2G Then the pointy heads (step forward Mr Jobs) had another idea. Why not use your phone to look up maps or that funny cat on YouTube? Well at first that it
Read more 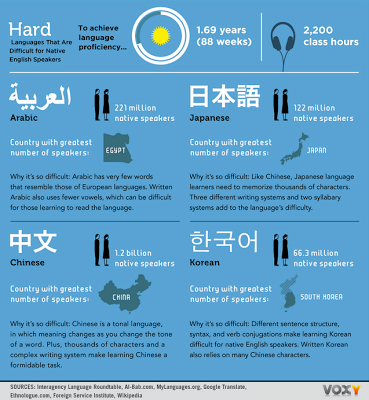 According to research done by foreign language department of US State Dept Cantonese - the form of Chinese spoken in Hong Kong and Guangdong Province (150 million+ speakers) - presents a particular challenge for English speakers.  There are 6 different tones in Cantonese. You must rise, maintain or lower the relative pitch of your voice to "sing" each word. For example, in English we naturally use a falling tone at the end of a statement ( You came. ) and a rising tone at the end of a question ( You came? ). To be understood in Cantonese, it is essential that you master the six tones. If you use the wrong tone, you are probably saying a completely different word.     In the written form all Chinese languages (Mandarin, Cantonese etc) share one system. But the spoken forms are as distinct as Spanish and Portuguese. A version of this post is included in  50 FAQ about English    ($1.75)
Read more

Which languages are easiest for English speakers to learn? 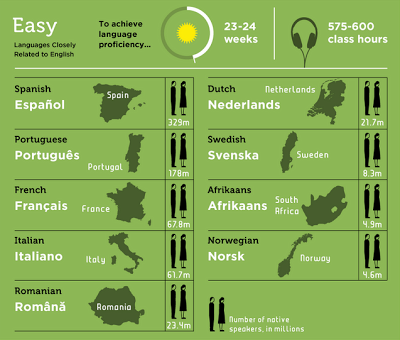 According to research done by foreign language department of US State Dept Interesting that German is not in this group as English is essentially a Germanic language. Though it shares substantial vocabulary with the five Romance languages, they are completely distinct in terms of grammar & structure - see here . Norwegian, Swedish & Dutch speakers of English routinely astonish natives with their facility for local idioms. Does the reverse apply when English speakers learn Nordic languages? I suspect not but would like to be corrected ... A version of this post is included in  50 FAQ about English    ($1.75)
Read more

Is it wrong to split an infinitive? 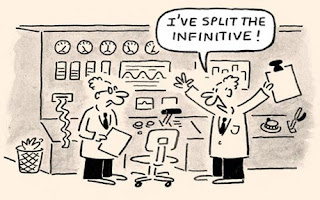 To boldly split the infinitive is fine - listen below: Listen! This is what Fowler says in his classic Dictionary of Modern Usage (1926). The English-speaking world may be divided into (1) those who neither know nor care what a split infinitive is; (2) those who do not know, but care very much; (3) those who know and condemn; (4) those who know and approve; and (5) those who know and distinguish. Those who neither know nor care are the vast majority, and are happy folk, to be envied. A Dictionary of Modern English Usage: The Classic First Edition  Grammar For Dummies Pocket Fowler's Modern English Usage (Oxford Paperback Reference) The Language Wars: A History of Proper English. by Henry Hitchings
Read more
More posts