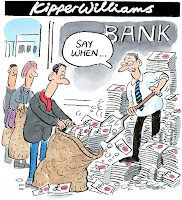 Quantitative easing is when a government pumps 'new' money directly into the economy. It does this is by buying assets - usually financial assets such as government and corporate bonds.

The financial institutions selling those assets (e.g banks) can then boost the economy by lending this new money to businesses.

Why is QE unusual?
The normal way a government stimulates economic growth is by a) reducing the cost of borrowing  b) lowering taxes, particularly on business investment. The problem in the current financial crisis has been that interest rates are already at historic lows. As a result some governments (notably the US and to a lesser extent the UK) have attempted to inject money directly into the economy.

The European  Central Bank has resisted QE until recently. Some would argue that this has been a factor in the weakness of the European economic recovery