What is showrooming? Why do retailers hate it? 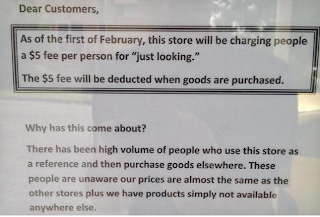 Showrooming is when a  potential customer  uses a store for a 'hands-on' test of a product before buying it from a cheaper online retailer. Not surprisingly shop-owners resent having their time wasted and one in Brisbane, Australia has retaliated


a speciality food store in Brisbane, Australia is charging visitors a $5 AUD (roughly $5.25) in an effort to stop them from "showrooming." Celiac Supplies, which describes itself as "Brisbane's only glutenfree and wheatfree store,".  The store owner  said that she was forced to put up the sign after spending "hours each week" giving advice to people only to see them leave and buy a similar product elsewhere. "I'm not here to dispense a charity service for [large supermarkets] to make more money." Customers will apparently be refunded the $5 charge on making a purchase